The engine of rechargeable battery, cathode material – Innovating the engine of electronics!

Form portable IT devices to the electric cars and energy storage system! From monopolizing energy to sharing energy and preserving environment! A story from research engineer Im, Won Bin on innovation and ‘the better earth’

What is cathode material?

What do you think the engine of electronic devices? It is the battery which functions like a heart. The engine of that battery is ‘LMO.’ A battery is composed of anode, cathode, electrolyte and separation film. Electricity flows from anode to cathode to charge, flows from cathode to anode to discharge. A secondary battery repeats charging and discharging. At this moment, lithium-ion from LMO moves between anode and cathode, allowing electrical flow. Therefore, we can say that LMO is the heart of electronic devices!

Where is cathode material mainly used in?

Currently, it is being used in secondary batteries for portable electronic devices such as smart phones, tablets, laptops, mp3 players and PDAs. In the near future, the market will rapidly grow to serve electrical cars and medium-large sized energy storage systems. According to the government reports, the market size of medium-large secondary batteries for electrical cars in 2020 will be the double (26.4 billion dollars) of IT small batteries market and ESS lithium-ion battery market will record 46.8% growth annually and grow up to 17.4 billion dollars market in 2020. 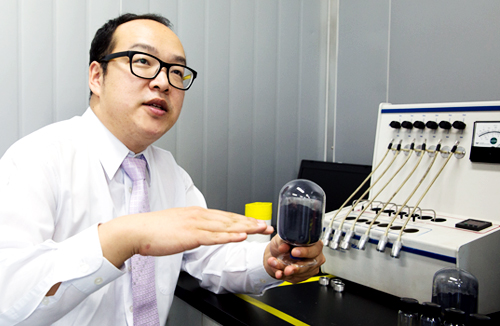 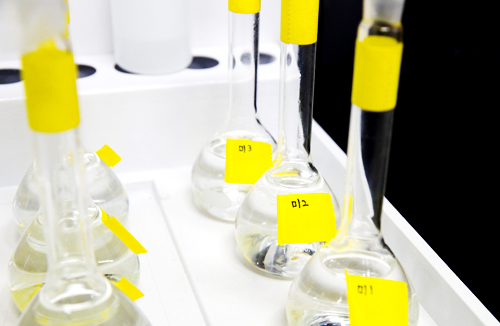 How are you preparing?

We think suitability is very important. So, we are developing active materials manufacture technology that suits our clients. Simply speaking, we are developing dry type LMO with price competitiveness like a ‘short-distance sprinter’, the ‘strongest’ wet type LMO like Usain Bolt, and active material with longevity like a marathon runner which can run for a long time with only single charging thanks to its large capacity.

What kind of changes will ILJIN Materials’ innovation bring into the world?

According to the characteristics of the products and consumers’ needs, I think the final products will be completed by selecting secondary batteries with different types of cathode materials. With a single charging, people will use their phones longer and drive noiseless and pollution-free electrical vehicles. Also, a vehicle that can go from Seoul to Busan with a single charge and an electrical sports car that can run autobahn with strong active materials will be developed.

I’ve mentioned cathode materials are ‘the battery engine’. Honestly speaking, I believe our research start from our care on humanity and our future. Coping with energy exhaustion, efficient use of energy, the thought of preserving ‘better earth’ for the next generation are where secondary battery development begins. Replacing fossil fuels to reduce environment pollution source, resolve energy imbalance by using energy storage systems, preserve our earth for the next generation. Future for the people and accepting the challenge for the future are our ‘innovation.’

Challenges and innovation to be the world’s best